The Disappearance of Steven Koecher


Steven Koecher was a 30 year old from St. George, Utah who went missing in Henderson, Nevada on December 12, 2009. The circumstances around his disappearance are unique; Steven is a devout church goer, clean cut and never been on the wrong side of the law. He isn't the type of person you would expect to go missing but, when he embarks upon a seemingly random road trip to Nevada, all bets are off.

At the time Steven went missing, he was faced with some financial worries. He was unemployed and behind in his rent. He occasionally passed out flyers for a Utah window washing company, which seemed to be his only income at the time. However, despite his money problems, Steven by all accounts seemed in good spirits. His spontaneous trip from Utah to Nevada was puzzling, though. Items were purchased for Christmas while on the road and he hoped to visit a female friend along the way, only to discover she wasn't home. Instead he spent time briefly with the family.

He continued his trip, conversing with people on his cell phone but giving no reason as to why he was around the Las Vegas area. Why he headed there specifically remains a mystery.


Steven's car was found parked at a dead end cul de sac in Henderson. It was a quiet housing development for older people, many 55 years or older an retired. The Koecher family was contacted in regards to the abandoned car and, to them, something was definitely not right. Steven was officially reported as missing shortly thereafter. Found in his car was all of his belongings, except for his phone, wallet and keys.

Surveillance video from a homeowner managed to capture Steven's white Chevrolet Cavalier passing by as it was parked at the end of the street. Shortly after, the camera shows 2 angles of what appears to be Steven walking past the house at almost exactly 12 pm on December 12. He appears to be carrying a folder or some item. After he walks out of view of the camera, he never returns to the car and is never seen alive again.

This mysterious case was featured on the show Disappeared, as well as speculated endlessly by sites such as Reddit.

As of 2015, Steven Koecher is still missing.

So what may have happened?

With all missing persons, we can easily speculate as to what happened. But in this case, there are many things to first consider. Steven was not in great financial shape, so traveling for work is very possible. He kept in touch with others, so besides the unexplained nature of the trip, nothing seemed wrong or unusual based on his demeanor. The trip itself was quite random in terms of direction, based on cell phone pings and debit card transactions. I think only Steven himself truly knew the destination, no one has elaborated as to why he actually did this. Searches of his laptop and apartment yielded no clues either. So we really have no idea.

What we do know is very little. Cell phone and computer records reveal nothing to why he stopped and parked at this particular housing development. But his car was there and he did likely walk past a home security camera about noon. Obviously, this raises some questions.

His cell phone was telling as well. Call logs don't seem to be out of the ordinary, everything seems to be accounted for. However the cell phone pings reveal some activity after Steven disappeared. 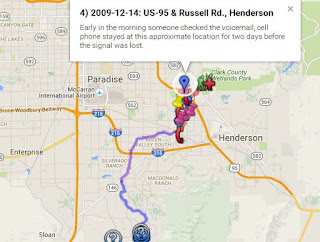 The phone shows movement from the south, where Steven parked his car, to the northeast, where it pinged off a few towers along the way. Voicemail was checked in the early morning of December 13. The phone stayed in the general area of Russell Rd in Henderson until the signal was lost. The big question here is: was Steven still with the phone? We don't necessarily know if this travel is indicative of Steven and the phone, or just the phone.

So ultimately, we have a 30 year old guy, with a very clean background, despite some money issues, who ends up in a random area. Parks his car. Walks away. Poof, gone. Lots of speculation that this was a shady Craigslist type job interview that went horribly wrong. I don't necessarily agree with that. Here's why: The complete lack of an electronic trail as to why he was in the Vegas area is baffling, but certainly if a job offer was on the table there would be a call or two, I would imagine. Also, who arranges a meeting and has a potential job prospect park in any place other than the driveway? Surely anyone with common sense would see a huge red flag from some internet job offer than asks to park on the street and walk to a specified residence; on a Sunday no less. I just don't see that angle.

Based on his parking in a secluded dead end area of the street and the complete lack of correspondence regarding a job meeting, I think Henderson may have just been a random stop on a fairly aimless trip of business and pleasure. To someone distributing flyers, it was a pretty idyllic area to drum up business; older retired folks in a quaint community who might be willing to pay for window washing services. We have no idea if Steven passed out other flyers along the way, so this could have been his first stop or one of many. There was probably a bigger motive to the trip, but we will never know. We do know he had flyers in his car, so it might have been intended to occasionally stop and pass a few out.

We know he never walked back past that camera again, and certainly didn't go back to his car. So whatever the circumstances are that led to him vanishing, it was sparked by someone or something in that development. Now, in communities like that people tend to be attentive. Neighbors peer outside windows, people work in their yards, walk their dogs etc. To me, it's very strange that no one noticed a young man walking in the area. So either this is the first retirement community in the world without nosy neighbors OR Steven quickly entered a house or car. I'll go with the latter.

What I'm thinking here is perhaps Steven decided to speak to people he saw in community, instead of  just placing a bunch of flyers in doors. It's more personal, and a smiling face is a lot more effective than simply a piece of paper stuffed in a door. Perhaps the first person he saw invited him inside and it all went downhill from there. Whatever it was, he surely didn't spend a lot of time walking, thus the lack of neighbor sightings. In the episode of Disappeared, one neighbor did express suspicion to police regarding another resident. So even in a development of largely 55+ year olds, there are likely to be some shady characters despite the age bracket. Not to mention residents with shady relatives, handymen, house sitters etc.

In the end, I think Steven Koecher was lured into a stranger's house shortly after he parked his car. Desperate for money, he was likely excited by the prospect of a new client. The conversation then likely turned into a lucrative job assignment with a quick payment promised. This may have entailed something with the drug trade. Whoever is responsible, probably spoke to Steven in length, got to know him and quickly realized he had no ties to the area, needed money, was possibly naive and far from home. The possibility of him ending up in a drug deal gone bad is possible, but one way or the other I think he left the community in another car, and eventually realized he had gotten himself into a bad situation, but by then it was too late.